Happy and blessed happy father’s day to all. Being  a father is probably one of the toughest jobs in the world and some would argue that the role does not come with manuals. I beg to differ on that one because as i ponder on the word of God and all the beautiful scriptures i know that parenting does not have to be a lonesome tough road. We have Christ therefore we can do it all through Him who gives us strength…after all the Lord has entrusted us with His most precious gifts (Psalm 127:3 ).

The word ‘father’ is a deep word and as one Christian author once pointed out ‘invokes all types of emotions’ because Some people do have issues with accepting that there is a heavenly loving Father (our Father which art in heaven). For those having issues in that area i pray that God will heal your relationships and family ties.

For many years i had issues with self esteem but as i discovered my father and saw how special i was to him somehow those issues melted away and now as a woman i still hold dear everything he taught me because it has helped me be the confident person i am today so i thank you so much dad.

Again happy father’s day and Yahweh’s blessings keep you and equip you to continue being the best father’s you can be. And also a big happy father Father’s day to our heavenly father who art in heaven because He is the Alpha and Omega.

Image is property of the spirit radio ( www.spiritradio.ie )

Happy and blessed birthday to Pastor Joyce Meyer who is 72 today. If you have never heard of Joyce Meyer and her story then my friend we need to have words…i had no clue about her teachings until i came to Christ in 2006. I remember those early days i would just switch GodTV and she would be there blessing everybody with her testimony. Most of the time i would just have the TV in the background whilst doing my chores and just let the messages sink in.

Her story is one of great strength and beauty which illustrates the beauty of God. She unfortunately suffered sexual abuse at the hands of her father and this opened doors to other issues. Recently whilst watching enjoying everyday life i heard her say she went through breast cancer and had to have one breast removed.

Now is not the time to focus on the past issues but i just wanted to paint a little picture just to illustrate where she was and who she is now and has been for decades. Look at that picture above with her wearing a blue top, does she look 72? no i think she looks more like she is in her 40s. She looks blessed and she is a blessing and i am reminded of that scripture (Isaiah 43:2), ‘when you walk through the fire, you shall not be burned; neither shall the flame scorch you’. So happy birthday Pastor Joyce Meyer, God bless you with long life and perfect health in Jesus name… 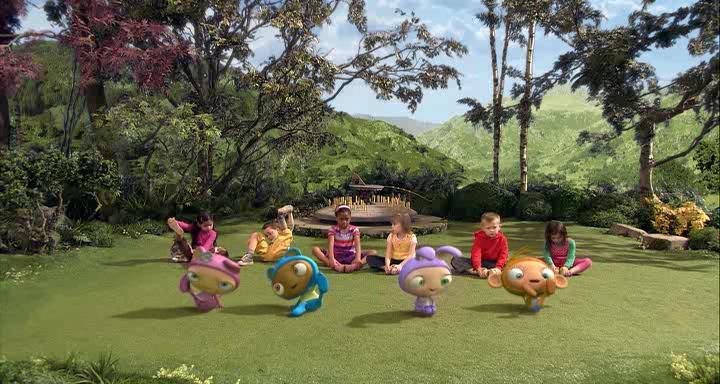 I don’t know if its me, but i have seen an increase in new age stuff and darkness creeping into children’s shows. I first begun to notice this when my first daughter Grace was 1. I was in the kitchen cooking dinner and i could hear a voice from the telly saying, ‘yogo yogo’. Out of curiosity i popped my head in the sitting room and i saw my innocent Grace watching waybaloo. The characters were putting themselves in yoga positions and postures and there was this haunting chiming music in the background. I saw a crystal pendant hanging near this dial type of a symbol.  This was a bit much for me and something in my spirit did not like it so i quickly changed the channel. I did not think it was right for the BBC to be feeding these things into my child’s spirit and mind. I believe people should  practice their beliefs however i do not think it should be forced upon young minds.

I had a talk with friends who had the same concerns. As we discussed we realized there were more and more programmes such as Holly’s little kingdom, Tree fu tom and more. I have even heard the tree fu tom character say, ‘follow me lets do big world magic’. There you have it discerning mums and dads. The enemy is no longer trying to hide his agenda. The agenda is as clear as day because i cannot read ‘big world magic’ in  any other way.

Most recently Grace was watching Sophia the first on Disney junior. There are some nice shows on Disney junior that i find educational such as Special agent oso, handy Manny and Sherrif Callie. Asides from that, i cannot ignore the fact that Disney loves too much magic. Recently whilst my daughter was watching Sofia the first i noticed a scrawny looking character  Cedric who calls himself the sorcerer. Cedric was trying to get his hands on Sofia’s Amulet. This was a new word to me so i looked it up and most of the findings read, ‘

An amulet (Latin amulētum) can be any object whose most important characteristic is its alleged power to protect its owner from danger or harm. Amulets are different from talismans as a talisman is believed to bring luck or some other benefit, though it can offer protection as well’ (from en.wikipedia.org/wiki/Amulet03/jan/2015)
The above description was shocking and then i realized a top gifted to Grace has the same amulet( necklace) around the neck area and so threw the top in the bin. The item was purchased  innocently by my friend but after watching the amulet episode i realized it was something i was not prepared to let my daughter wear. I want my children to grow up in the full knowledge of Jesus Christ as their personal Lord and Saviour. I trust that my children will always rely on the power of the Cross therefore getting rid of that top was a start. It is not easy of course because at the moment everywhere you look you see frozen and similar shows all focusing on the dark side..the merchandise people have really gone coockoo on this one and i would not be surprised if i went to the supermarket tomorrow and i saw a frozen toilet brush lol. Yes it is not easy but with Christ all things are possible and i also see something as teachable moments which enable me to teach my children the right things based on our faith.
A funny thing  happened recently when my husband was telling my daughter off because she had been naughty. She was so upset she turned towards him and waved her hands as if holding a wand and said, ‘daddy i am going to turn you into a frog (she was copying holly’s little kingdom). We tried not to laugh about it in front of her but just explained to her that turning people into frogs is not the best way to get your way and its much better to bless than curse.
I do not want to come across as a boring mum. My darlings have lots of fun and there are lots of secular and non secular shows they enjoy but at times as discerning parents we do have to draw a line. Matthew 6:22  reads,’The light of the body is the eye: if therefore thine eye be single, thy whole body shall be full of light’.
Asides from watching TV there is actually something called life which is best enjoyed with human beings out and about in the open fresh air no matter the weather.
Image above of waybuloo belongs to http://waybuloo.wikia.com/wiki/Ancient_Yogo_Machine