Roughly 3 weeks ago my friend’s cousin Tiago was run over deliberately by a stranger and left for dead. This is the news report of the incident which also shows him on the ground and the suspect being taken away. Please continue praying for Tiago. The doctors are already calling him a miracle because he was pronounced dead on arrival to the hospital. So far this week he has been breathing on his own for about 3 days now. He is attempting to talk and recognizes his family members. His mother Deyse would like us all to also keep the suspect in our prayers and for Jesus to change him and help him. 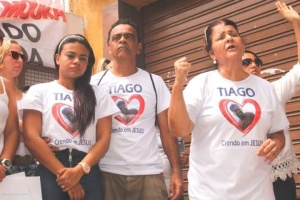 I got a call the  Friday before last from a dear friend who had an urgent prayer request. It was unusual for her to call so late but i knew whatever it was had to be serious. She told me that her aunt from Brasil needed all believers around the world praying fro her son right away as he was in critical condition in hospital. It unfolded that on Sunday 8th March her cousin Tiago had been in a bar when a fight broke out which he had nothing to do with. Being the person he is he stepped in to calm the situation. The perpetrator did not take kindly to this and left. Tiago left the bar shortly after to get home not knowing that the guy who had been fighting lay in wait only to deliberately run him over 3 times. By the time Tiago was taken to hospital he was covered in a white sheet and declared dead. His lungs were not working due to punctures, he was brain was dead and he had crushed pelvic among other injuries. When his mother rushed to be by his side, she stood by his bed and said, “Tiago Jesus is calling you “. As soon as she uttered those words his body started shaking and she knew she had to fight for her son. Days passed by and he was still attached to the machines whilst the doctors persuaded his mother to turn off the ventilator and donate his organs. His mother, pastor Deyse from the town of Belo Horizonte told them the machine was staying on and she was trusting God for healing. Family members gathered to pray in the hospital, outside the hospital and even at the scene where the incident took place. In fact his mother has been going there to pray on Sundays since the incident took place. Prayers continued to flood in and everybody continued to pray. His sister Jessica made a vow unto God saying that if God will give her a sign her brother will live she will cut off her long hair…wow such amazing faith. I have seen the girl’s hair and she had amazing thick long hair.

Anyways sometime last week after another day of pressure from the doctor’s to have the machine turned off, his mother held his hand and said, “Tiago its mummy, if you can hear please squeeze my hand” and he did! The doctor’s then had to test the tube as a procedure and as they took it off, Tiago grabbed the tube letting the doctors know he was still alive and kicking. His sister quickly went to the salon and got a hair cut because she got her confirmation that her brother will live.

A few hours after responding to his mother, Tiago also opened his eyes briefly all to the amazement of all the doctors who had already washed their hands of him. They keep telling his mother, ‘wow your people are really strong with their prayers because it’s working’. A day or so passed and Tiago opened his eyes and his sister showed him her new hairdo to which he replied with a huge cheeky frown to show his disapproval and plus remind us he is still the same big bro. Pastor Deyse felt encouraged that her son was (and is) slowly coming back to her so she sat near him and explained to him what happened and how he ended up in that condition and by the time she finished, Tiago shed a tear.

Today as i write this, the doctors have reported Tiago is no longer in a critical condition. He is now in a stable condition and his lungs are working 100%. On top of that, he will not need surgeries of any kind and if he continues this way then he will be moved to the recovery room soonest!😄

Please as you read this continue praying for perfect healing. We are all praying that He who begun the good work in him will be faithful to complete it (Philippians 1:6). This story is just amazing and we await on the Lord to perfect his healing in making Tiago 100% healed and use him His Glory. I will post a video shortly which covers the whole incident (sorry it is in Portuguese and no translation). Towards the end of the video you see Tiago laying on the road. If you are like me and get upset easily please don’t watch. Thank you so much for reading this and for praying and as you pray for Tiago , his mother would like us all to pray for the young man who did this terrible thing and for the youth in general. May God forgive and restore them all in Jesus name Amen.

photos used with permission from the family.  The 4th image shows Pastor Deyse in taupe trousers standing at the front and leading prayers for her son. The last image shows Tiago’s sister Jessica after the chop . God bless them all 🙌💕💕