I love this song. It is so catchy and a real blessing which often allows me to get on with daily tasks with real pleasure. We all have a testimony because God has redeemed us in christ(1Peter2:9hath called you out of darkness into his marvellous light)

Anyway enjoy the song and check out the bit where Mr Brown is on the hospital bed being healed…see he even kept his shoes on because he was expecting his healing Amen lol.

You made something outta nothing by Jessica Reedy. I heard it playing on OHTV OH worship. It is such a beautiful song which i cannot get enough of. Like it says in Psalm 8:4, ‘what is man that you are mindful of him, and the son of man that you care for him? We are but clay in the hands of the Creator and this song just brings it home how indeed God can create something out of nothing. enjoy! 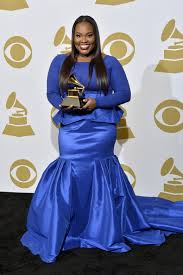 This week saw one of the biggest music awards take place. The 54th Grammy awards held on Sunday night and was presented by ‘girls just wanna have fun’ singer Cyndi Lauper. As we can expect from a  from a secular event, there were no shortage of controversy and shocking moments which i do not care to go into.

What really caught my attention and encouraged me was how well the Gospel  category did. Firstly Mandisa won her first Grammy award for her ‘Overcomer’ album .The American idol finalist was nominated for best contemporary Christian music and she quite rightly won. That is what you call an overcomer as she went from a reality tv show contestant,finalist and did not even win but then it seems God had a greater plan and it ios so inspiring to see that.

There were many other winners in the night including Tye Tribbett for best Gospel album and Tasha Cobbs who won her first Grammy for ‘break every chain’ which was nominated for the Gospel contemporary music performance.

Miss Tasha Cobbs looked dazzling in her flowing royal blue fish tail dress as she the thanked everybody for ‘taking a chance on a country girl from Jesup Georgia’.

As well as these big wins there were also other well known nominees from Matt Redman,Chris Tomlin,Matt Maher,Natalie Grant and more.

All in all i would say it was an interesting event where Gospel music really triumphed and long may this continue:)

The  29th annual Stellar awards took place last weekend and  was presented by Sherri Sheppherd and Rickey Smiley.  It was a dazzling night of great performances and winners and as you would expect from an awards show it was packed with jokes …inevitably one about Erica Campbell’s dress from her album cover (by the way i think she looks fab on her album cover).

The winners of the night include  Tamela Mann won a whopping 7 times in most categories including female vocalist and cd of the year for ‘best days’.  Kirk Franklin won an award for ‘take me to the King’

My fave  win for the night was Hezakiah walker who won twice , one in the traditional choir of the year category and the other in choir of the year. Having listened to ‘every praise’ only a few days ago, i think its a beautiful song and i quiet addictive too. You cannot listen to every praise without praising…the song does exactly what it says on the box so congratulations to Hezekiah Walker and Donald Lawrence for this great music.